You'll navigate the streets of ancient medinas, ride a camel over shifting sands in the Sahara, explore mud-brick cities in desert towns 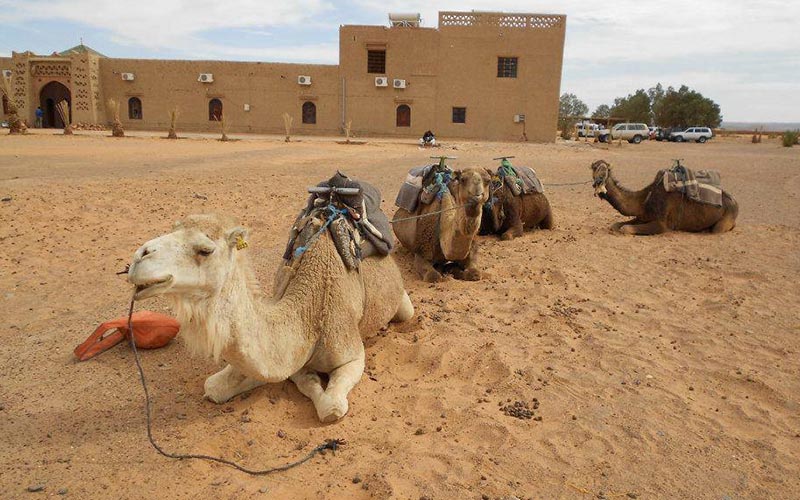 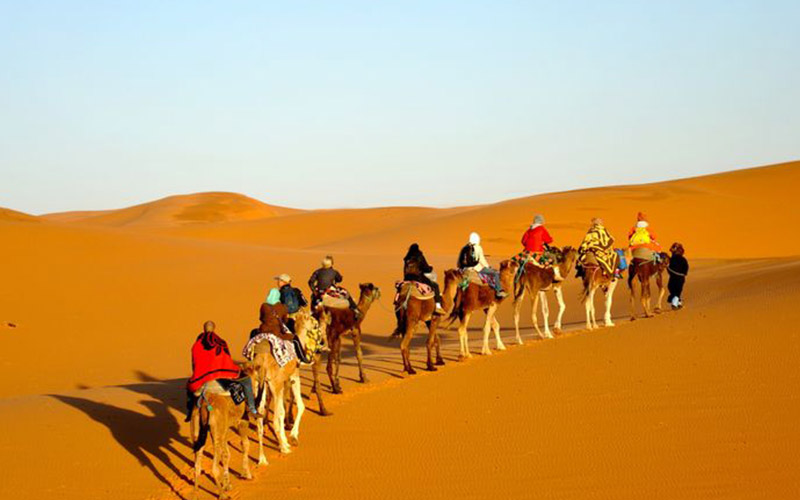 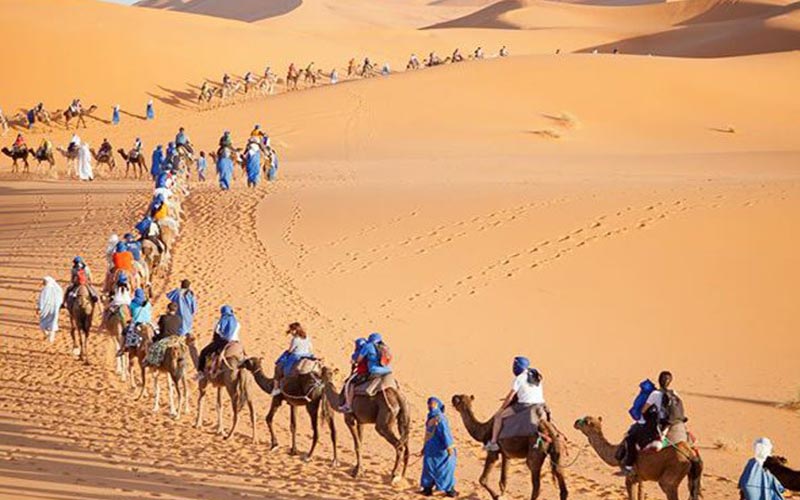 Explore the greatest of Morocco on this 10-day loop, which includes the imperial cities of Rabat, Meknes, Fes, and Marrakech, as well as the blue city of Chefchaouen and several days in the desert. You'll walk the streets of ancient medinas, ride a camel over shifting sands in the Sahara, explore mud-brick cities in desert towns, and cross the Atlas Mountains' high rocky peaks.

Flexible: Cancel up to 3 days in advance for a full refund

After breakfast, you will begin your city tour of Marrakesh ( the red city of Morocco ). The guide will ensure that you see the most important historical and cultural sites, such as the Bahia Palace, the Saadien tombs, the Ben Youssef Koranic school, and Morocco's largest traditional souk. You can visit the Koutoubia tower and the Majorelle Gardens after lunch at one of the local restaurants near the main square.

First we cross the spectacular Tizi n' Tichka Pass of the High Atlas mountains. Your first stop will be to visit two Kasbahs, Ait Ben Haddou and Kasbah Telouet. Driving between these two Kasbahs you will have another quick stop to take a look at the Salt Caves.

After these stops we will drive onwards passing through many Berber villages, being able to observe the Skoura oasis, Kalaat Mâgouna, groves of spectacular olive tree's and barren hillsides that are clustered with Kasbahs and traditional Berber houses. After lunch we drive further to Valley of the Roses, with beautiful views of the Dades valley also know as the Valley of a Thousand Kasbahs.

Overnight Dades Valley in a hotel on half board.

Our destination is Merzouga, along the way we will pass through Tinghir visiting the local palmeries. The next big stop will be to visit Todgha Gorge where you will walk through the gorge having the chance to take in the spectacular canyon. Afterwards we will drive onwards passing through many Berber Villages, Erfoud ( this is a famous area for fossils, you will have a chance to observe the process of cleaning and polishing the fossils and be able to see the finished products) and Tifilalte oasis eventually reaching Camp Erg Chaabi in Merzouga. You will then be met with your guide and camels and have a 1h30 ride to reach the Camp to admire the sun set. Over night in camp on half board.

After enjoying the amazing sunrise among the sand dunes and having breakfast, you’ll start the largest tour of the dunes through couple of Berber villages, you’ll stop in Khamlia village it’s a traditional home built of thick earthen bricks made from a mixture of clay to enjoy the live Gnaoua music which is played by the locals. Set off to other sights you’ll «live like a nomad” experience the simple life through visiting them in their tent. in the Erg Chebbi sand dunes, the largest in Morocco, enjoy the panoramic scene of black volcanic rock on the plains, the bright blue sky, the green palm trees, white salt beds, mirages of water, and golden shifting dunes. Arrive at the stunning accommodation.

After breakfast in Merzouga travel from Merzouga dunes to Fes via the beautiful Ziz valley, Errachida and Midelt. Lunch on the way and short break to watch the monkeys in cedar forests of the middle Atlas close to Azrou city at “Gourrou forests”. You will continue to Fes, where your tour from Marrakech to Fes ends. For information Fes is considered to be the 4th largest city of Moroccan kingdom, it is devide into 3 sections (1:Ville Nouvelle built by French protectorate, 2: Fes El Bali or the interior of walls and ramparts and 3: Fes Jdid). In order to access to the medina of Fes, the main gate is Bab Boujeloud. night with dinner & Breakfast

Explore the attraction of Fes on a full-day guided tour. You will be picked up from your hotel or Riad and taken to the magnificent Royal Palace to admire its fantastic giant gates and fascinating architecture. Investigate The Mellah The Ancient Jewish Quarter, Jnane Sbile Gardens in Andalusian Style, Batha Museum, and Marvelous Towers Following that, you will visit the Old Medina, a UNESCO World Heritage Site with shops selling carpets, silver, carpets, silver, and the most captivating handicrafts. You will be shown the famous Al-Karaouine university, which dates back to 859, as well as the sophisticated architecture of Najjarine Fountain, the ancient Chouara Tannery, and the blue-tiled Bab Boujloud Gate. night with dinner & Breakfast

After breakfast we Drive you to the imperial city of Meknes, Discover walls with monumental gates dating back to XVII-century as Royal Palace, Berdaïne Bab, Bab Khemis, Bab Mansour and El Heri es-Souan huge granaries and stables built by Moulay Ismail's soldiers. *Go to the underground channels which bring fresh water from Middle Atlas Mountains *Stop in Moulay Ismail Mausoleum *Visit Place-El-Hedim great monumental and other places. After we Drive you to Volubilis Roman ruins.

Arrive at Volubilis an attractive preserved Roman ruins. Together We will learn more about the historical and the cultural Roman city by looking at the ruins of the Arch of Caracalla, Basilica and Capitoline Temple. After lunch, Drive passing through Ain Lah, Royal family firm, Zagotta, Dam Achahad & Rif mountain. Stops to enjoy the landscape, cool air, and capture photos. Drive to Chefchaouen passing through the beginning of the Rif Mountains, before we arrive at the beautiful pearl of Morocco, Chefchaouen.

After breakfast the journey continues for about 5 hours by road to reach Morocco’s capital and residence of the current King; Rabat. We drive to the Hassan Tower for a visit. The tower is a half-built minaret of an incomplete mosque. It was intended to be the tallest minaret for the mosque whhich also was intended to be the world’s largest. The construction began at the end of the 12th century under the reign of Almohad Sultan, Yacoub el Mansour.

Dinner and hotel in Rabat.

The day begins with a guided tour of Rabat's elegant city, led by an official English-speaking guide. A tour of Rabat includes stops at Mechouar (the area surrounding the Royal Palace), the majestic Mohammed V Mausoleum, the Hassan Tower, and the Oudaya Kasbah, which overlooks the Atlantic Ocean through fortified walls and offers breathtaking views. There are also many Moroccan artisan galleries in the area. Following the city tour, we travel to Casablanca, Morocco's commercial capital and largest city. Among the places to see are Mohammed V Square, which is said to have the most impressive architecture in the city, the majestic Hassan II Mosque, the Habous District, the central market, the residential districts Anfa and Ain Diab, which are known for their gardens, beaches, and terrace...

After visiting the mosque, we journey south by the highway for about 2,5 hours to reach the exotic Imperial city of Marrakech.Dinner and stay the night in a riad in Marrakech. 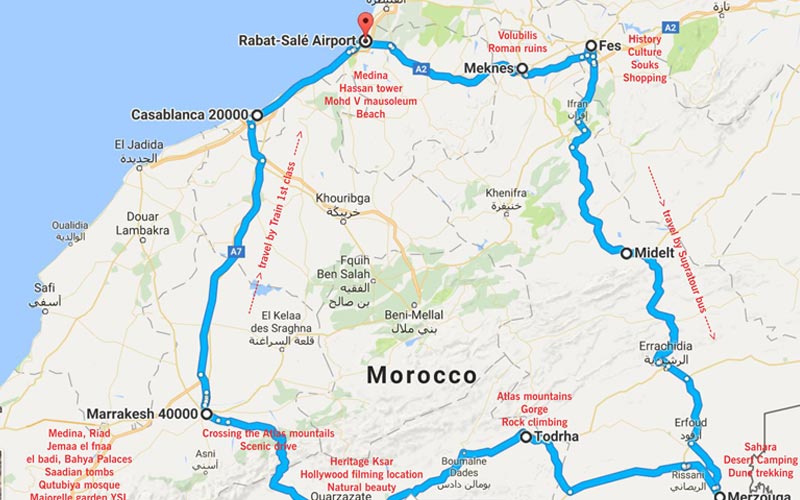 Contacts us today and be a Part of it ! we provide each services to our clients. also customize your Morocco visit today ! 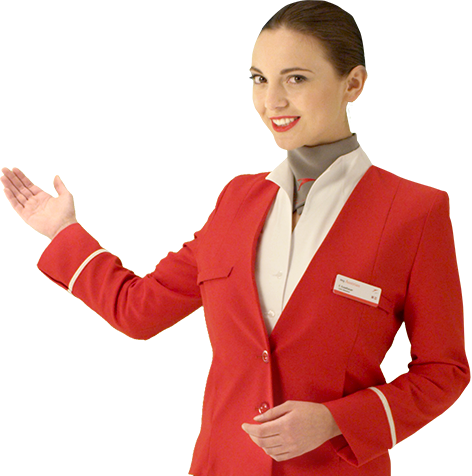 Get The Best Deals On Excursion, Trekking And Biking & Stay Holidays To Morocco. Great Offers Available To Book Online With Get Live Experience - The No 1 Tour Operator In Morocco.